Our interactive whiteboard testing project is finally getting finished and it’s time to wrap up the findings. We have focused on testing the boards’ technical usability on linux. Pedagogical usability and deeper analysis of features has not been done as part of this project as we need to first find out which whiteboard models actually work with linux. We may do further testing and comparisons later, though.

We had five interactive whiteboard models in test lab: 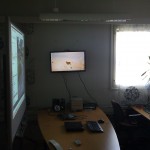 The local vendors provided us the test hardware and not all models are the newest ones available. Most manufacturers use the same technology in different models, so the test results from one model often tell a lot about the whole product line. We cannot say anything for certain about not tested models, though.

In linux usability the best were Smartboard and Promethean. Linux support was quite polished and also the physical hardware were convincing. Both have reasonably well packaged software that have more advanced features than the rest. Dymo’s MimioTeach was also interesting and it shines in use cases where mobility is a requirement. Overall impression of Mimio suffers from unpolished software packaging and lack of Finnish translation. Cleverboards had quite a few problems mostly caused by unfinished linux software.

Tested features have been compiled in the following table and every whiteboard model has its own article.

Only basic features were tested. It should be noted that different whiteboard models from same manufacturer may support different features even with same software packages. It is not possible to name a single best model from the tested models as different use cases require different features. Smartboard has the best linux support at the moment and the software worked as it should. For centrally managed environments all software packages need development to enable central license management. Currently license files need to be found manually from the filesystem after debugging the software, but this is far for user friendly. LTSP systems are spreading in schools all over the world making this an issue in many places.

Firmware updates were done only when absolutely necessary – meaning that only Mimio was updated as it wouldn’t work otherwise. Smartboard suggested an update, but it wasn’t done. There were no big differences in resource usage between the different software packages. Adding video and flash elements caused load to go up suddenly on all of them. In normal usage there were no big problems with memory usage or performance.

Biggest noticeable difference between the different whiteboards were touch sensitivity and latency. Latency here means the delay that can be seen when drawing on the board – does the mouse follow the pen/finger immediately or does it take some time to react. Mimio had the smallest latency that had nearly immediate response even when drawing with fast movements. Sensitivity means how well the whiteboard senses touch. For example with Promethean all testers had trouble drawing solid lines because the line would have breaks with it as the whiteboard didn’t sense the touch all the time.

The table below summarises technical features. Various problems with Cleverboard Lynx 4.0 software may have caused some things to be reported incorrectly.

There are also lots of other features in the software packages, but we have been focusing only in the basic features. Pedagogical material, support services and community activity has not been evaluated. Most software share the same features and usage logic is the similar in all of them. All have software that allows users to create graphical presentation similar to PowerPoint and OpenOffice.org Impress. Presentations can be shown page by page in fullscreen mode. Most software are hybrids between presentation software and drawing programs.

Examples of basic features are also curtain and spotlight features that allow the presenter to show only certain parts of the material on screen.

All the software is proprietary and closed sourced, so only the manufacturer can support them. Manufacturers claim to support most linux distributions, but we could not test anything else besides Ubuntu in this project. Most drivers are also so new that we cannot say much about longterm support that is available for them.